In the upcoming local elections, for the first time ever, Bromley residents will have to produce verifiable ID at polling stations to cast their vote.

This Borough has volunteered to take part in a pilot scheme which, if successful, could see the scheme rolled out across mainland UK. This follows a Conservative government report which claims such moves are necessary to prevent voter ID fraud.

On the face of it, this doesn’t seem unreasonable. Many other countries insist upon ID before you can vote. Surely people can do the same when voting here? 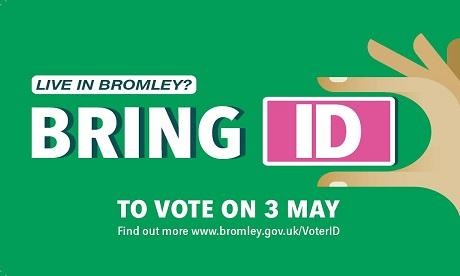 But here’s the thing – millions of people in the UK don’t have a driving licence or a passport. And voter ID fraud in the UK doesn’t actually exist on any meaningful level – a fact acknowledged in the report itself and supported by evidence of criminal allegations made last year (a grand total of 28 out of 45,000,000 votes cast).

It’s also costly to implement as money is spent having to train staff, raise awareness and introduce new systems at polling stations. When the Conservative Government and Council are slashing services and increasing council tax way above inflation, does it seem like a good idea to spend money on a scheme which seeks to solve a problem which doesn’t exist? Wouldn’t that money be better spent on protecting local people by building safe pedestrian crossings, or by maintaining a baby health clinic at Beckenham Beacon, for example?

There’s also a more fundamental issue, which is that the harder you make it to vote, the less people who do – with that decline concentrated in the least well-off and marginalised pockets of society. Or to put it another way, the people who need the most help from local politics are the very people who will be disenfranchised from it.

In the last Council Meeting we asked a very simple question: how the experimental pilot scheme would be measured with evidence and data. Any first-year secondary school pupil will tell you that measuring experiments is the basis of logical decision making – yet astonishingly, the Conservative Council couldn’t provide an answer. At best that’s gross negligence. At worst it’s utter contempt for those affected.

That is why organisations such as Age UK, the Salvation Army, Stonewall, the Electoral Reform Society, Royal National Institute for Blind People and the Race Equality Foundation – amongst dozens of others – have condemned this pilot and are urgently asking the Government to abandon the proposals.

The Lib Dems join the call of those organisations – not because voter fraud isn’t a serious issue – but because 1 person in 1.5m committing voter fraud is a lesser price to pay than untold and unknown amounts of people not being able to vote legitimately on May 3rd.