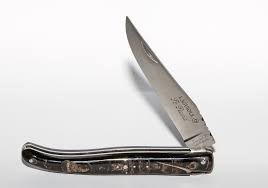 We're often told that, knowing they will be caught and punished will force violent thugs to control their behaviour. The evidence for this is mixed at best, but even if that approach has some impact, it doesn't make me feel safer either. Knowing that the only thing holding my fellow Londoner's violent tendencies at bay is the fear of punishment hardly fills me with confidence in my fellow man. After all, what happens when I'm alone, just me and my guide dog in a dark alley?

This is where Bimbo's story is instructive. It's not just that you or I would not hurt a defenceless animal. It's that the thought of doing so has not, and would not ever enter our heads. In the kind of world I want to live in, the kind of society I want to build, that should be true for everyone.

Over the years I've had some pretty fractious moments with one or two of my fellow Londoners. In the heat of the moment I may have even thought some pretty dark thoughts. But I have never carried any kind of weapon and certainly have never considered using one. And I'm nothing special. I'm just a normal person with a decent home, decent family, food on the table, and a touch of self-esteem. That suggests to me that it's not an impossible task. Maybe if we start by ensuring that every Londoner has what I have then the idea of hurting their fellow Londoners, let alone poor defenceless animals, might not enter their heads either.

As for Bimbo, the last I heard he was recovering well from his ordeal. Good luck to him.