The Spring Statement by Rishi Sunak is a shocking failure by the Conservative government to respond to the crisis for families facing the biggest drop in living standards on record. Leader of the Liberal Democrats Ed Davey said: “This tax bombshell will send a shiver down the spine of families who are drowning in spiralling bills. “

Rishi Sunak’s tax hikes will lead to a £44 billion bombshell by 2024, equivalent to almost £1,600 per UK household. The stark figures were buried in the small print of the Office for Budget Responsibility (OBR) report accompanying the Spring Statement. It finds that the net impact of the tax policies announced by Rishi Sunak since March 2020, including today’s tax changes, will mean tax receipts are £43.8 billion higher in 2024-25. The OBR also reveals the impact of Rishi Sunak’s stealth tax and freezing of income tax thresholds, which will cost taxpayers £17.5 billion a year. By 2025-26, 2.8 million low earners will be dragged into paying income tax and two million middle-earners will be dragged into the higher rate because of the freeze. 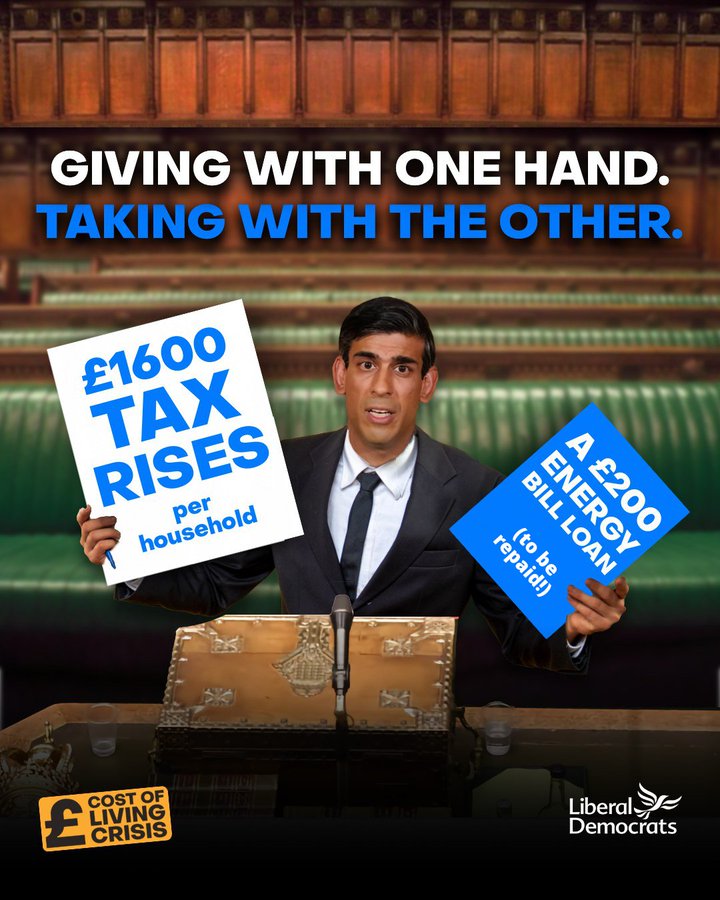 Ed Davey said: “Rishi Sunak has insulted millions of squeezed families across the country by thinking he can hide this in the small print. Rishi Sunak is following Boris Johnson’s lead by not being up front and honest with the country. Families need help, not tax rises. So what on earth is the Chancellor playing at? People are on the brink and need a lifeline today. That is why the Government must slash VAT today and finally scrap the shameful tax rise now just days away.”