Standing up for our capital in Brussels

This week, your London Lib Dem MEPs were listening to heartbreaking stories from EU citizens living in the UK and Brits living elsewhere in the EU who feel abandoned by their own government at the same time as Boris Johnson presented yet more disastrous, unworkable Tory Brexit proposals. We also heard how the rights and protections migrants and refugees currently enjoy as a result of our EU membership are under threat.

Liberal London will not stand back and watch these fundamental human rights being rolled back. We will keep fighting, every day, whether that is by lobbying influencers in Brussels or campaigning on the streets of London, to obtain an extension of the Article 50 process, in order to first of all avoid no deal and ultimately Stop Brexit altogether. 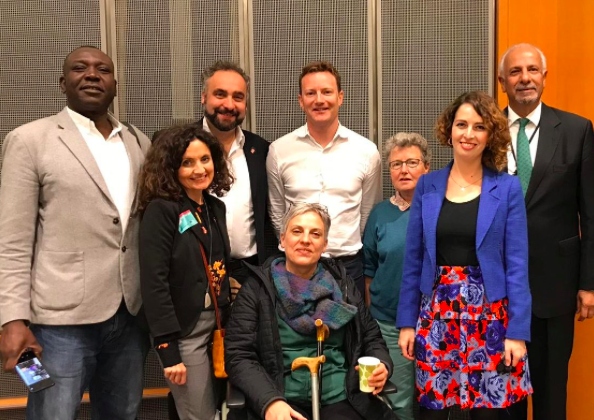 This week, I helped Haringey Welcome, a London-based campaign group seeking to promote dignity and respect for migrants and refugees, to bring a petition to the European Parliament calling on it to take steps to ensure the protection of migrants and refugees’ fundamental rights in the absence of a UK Government that is willing to do so.

The petition was submitted alongside four other Brexit-related petitions, highlighting the anxiety many are feeling as the clock runs down towards the next Article 50 deadline at the end of this month. The petitions drew attention to the flaws in Theresa May’s Withdrawal Agreement and the EU Settlement Scheme. Given Boris Johnson’s plan is even less well thought out, I am more determined than ever to stop it from becoming a reality.

Last month, I worked with other MEPs to bring a motion to the European Parliament calling for the immediate release of London constituent Nazanin Zaghari-Ratcliffe. The Resolution passed with the support of 608 MEPs. On Monday, I am bringing another motion to Camden Council asking the Leader to write to Boris Johnson urging him to meet with President Rouhani of Iran as soon as possible and secure her freedom.

Last week I was elected chair of the European Parliament's Delegation for Relations with India. India and the EU are strategic partners and global players, but a lot of potential remains untapped so it’s an honour to take the reins to drive more trade.

As squabbles were taking place at Tory party conference, I was taking part in a Budget Committee hearing for EU spending plans for 2021 - 2027. Members put forward their most ambitious plans yet – 2 billion euros for the climate, young people and the new economy.

The same positive outlook can not be said of Britain’s economy. First, we heard the collapse of Thomas Cook, then the threat of job losses at Nissan. As a travel industry entrepreneur before turning to politics I gave my view on what went wrong at Thomas Cook for the political website Comment Central.

Just before returning to Brussels for the 9th legislature, I spent a day visiting different London businesses to ask entrepreneurs directly how a no deal Brexit would affect them: The outlook was as bleak as you’d expect. Watch my mission here.

Finally, outside of daily political activities, I hosted an exhibition at the European Parliament, to highlight the problem of illegal wildlife trading, in collaboration with Eurogroup for Animals and UK Permanent Representation to the EU.

Ordinary citizens concerned about the consequences of Brexit had their voices heard in the petitions committee. I was privileged to ask on their behalf that the Parliament request that the UK government resume talks at EU-level, which they have been shunning since 1st September.

This week marked the sixth anniversary of the Lampedusa tragedy. The captain of the Sea Watch vessel, Carola Rackete, testified to the current situation in the Mediterranean, where migrants are still drowning. I stand with her and all refugee rescue ships. We must do better to welcome migrants to our shores and ensure a strong European response.

We also had the Commissioner hearings in the Parliament. Each member state proposes a Commissioner for a certain portfolio - justice, transport, etc. - and they are they grilled by the relevant parliamentary committee. One Commissioner was conspicuously absent: the UK's. Boris Johnson did not bother to put forward a British Commissioner, despite the fact that we will most likely still be in the EU when the Commissioners take up their roles. Another dereliction of duty to British citizens. You can see my speech on this here.