We joined the campaign for a safe crossing for Eden Park High School in November 2018, promoting the petition organised by a local resident and signed by hundreds.  The council took no action and sadly yesterday (1 September) a child was involved in a road traffic accident on the first day of term.   Our campaign in 2018 was for a safe crossing near the junction of Upper Elmers End Road and Balmoral Road - yesterday's accident was at nearby Elmers End Green but it highlights the importance of providing safe routes to school as children return after the long lockdown.   You can sign the petition here to show your support.. 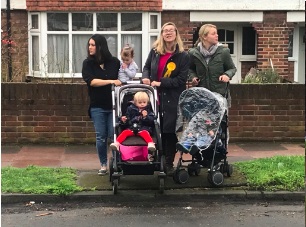 This is what we reported in 2018.   Disappointingly, but not surprising given their track record on road safety, the Conservative council have failed to act.   Now a local resident has decided to step up and lead the campaign - Helen Cristofoli is a local parent and resident.   She tells us: "In September 2019 the new site for Eden Park High School will be open and as such, three years of children (years 7, 8 and 9) will be making their way to and from school, many by foot. The school is based on Balmoral Avenue, sandwiched between two busy roads (Eden Park Avenue which has travel islands on it, and Upper Elmers End Road, which doesn’t).   Living on Upper Elmers End Road I can confirm how busy it is and how you have to take your life in your hands if you want to cross it.  I am calling for a pedestrian crossing / pelican crossing to be installed on Upper Elmers End Road at the junction with Balmoral Avenue "