A campaign group opposed to the plans to redevelop the Walnuts - called "Nuts to the Walnuts" has attracted over 600 members in barely a month since its creation.  The Lib Dems joined its first meeting on 1st December.

Local members Rick Das, Andrew Stotesbury, Martin Curry and Julie Ireland were amongst the many who attended to discuss the proposed Walnuts development.  Rick Das spoke on behalf of the Lib Dems and articulated many of the concerns which had been previously raised: the height and scale of the development, the potential disruption to the business of the town over many years, the pressure on the infrastructure – both roads and public services such as health and education, the lack of parking facility and the likely increased congestion. He also put forward alternative ideas in favour of a smaller development, including more consideration for key worker accommodation. Most importantly, there needs to be proper consultation and a plan for the town. 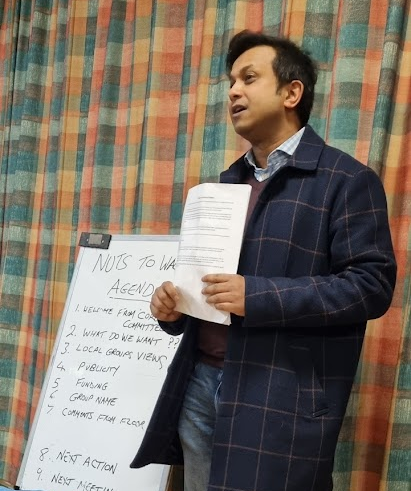 The meeting was not partisan and a candidate for the Labour Party raised similar concerns. A representative from Friends of the Earth spoke and the Greens sent a written statement.  The Conservative local councillors and MP had been invited but did not attend. The Councillors have agreed to meet with the group on another occasion.

A lot of people expressed doubts about the truthfulness of the claims made by the developers at the consultations earlier in the year, in particular their survey results and the artist impressions of the development. It was noted that the developer owned a long leasehold interest in the property with the freehold of much of the land being owned by the Council and that the Council had been working with the developer to come up with the current scheme.

The management committee of the group will consider and report back on the points raised and key conclusions of the meeting, which were:

The Liberal Democrats assured the meeting that all Lib dem councillors elected to Bromley in May 2022 for any ward will vote against the development,

The Lib Dems' comments about the proposed Walnuts development can be found here.