Lib Dem London Assembly Member Caroline Pidgeon recently raised the issue of rising hate crime on the public transport network with the Mayor during Mayor’s Question Time. Too many Londoners and visitors to our city are being subjected to vile, hateful abuse and much of this does happen on the transport network. London is known as a welcoming, diverse and global city, but if we want it to remain so we need to urgently tackle this issue.

The Lib Dems have made three clear asks of the Mayor which are:

Tories Undermining the Fairness of our Elections

The Governments’ illiberal new Election Bill introduces a raft of changes to the rules of elections that will make them less accessible, less independent and less fair. The changes only benefit one party – the Conservatives.

As Liberal Democrats we believe our elections should be independently-run, free, fair and accessible to all those who wish to vote. As a party we have long campaigned for a more proportional voting system, one where all votes are important - not just those in a few select marginal constituencies!

Naturally the Conservatives want to stick to First Past the Post (FPTP), where they can win 44% of the votes and have 100% of the power like they did in 2019 - they know that in a  proportional voting system they will lose seats and have to work harder for constituents to maintain them.   Shockingly Labour also just voted against a proportional representation at their conference this October.

The Conservatives are going even further to protect their minority rule  - their Elections Bill is nothing less than a power grab designed to tilt the playing field in their favour further.

The new bill introduces a raft of changes, including:

You can see from this list why we think the Elections Bill is about the Tories tilting the playing field in their favour and little to do with improving the fairness of our elections. All the while, potential foreign interference in our elections is not a priority for the Government (who do no want to shut of their tap of foreign donors) – it is not addressed in the Elections Bill when it clearly should be.

A democracy is not dismantled in a day, it is slowly and quietly chipped away at.  The Liberal Democrats are at the forefront of protecting our democracy and ensuring it is fair for all – we will continue to lead that fight and will oppose this unfair Elections Bill at every opportunity and in every possible way.

If you want to help us defend democracy, you can:

You would be warmly welcomed – every penny, leaflet, call made, and every door knocked on makes a difference. Come join us.

Call for Government investment of £1,422,960 to double Warm Home Discount and prevent 5082 pensioners in Bromley Borough going cold this winter.

Bromley Liberal Democrats have called on the Government to double the Warm Home Discount for existing recipients and make it available to 664 extra pensioners across Bromley. The measure would prevent pensioners being forced to “choose between eating and heating this winter”, say the Lib Dems. 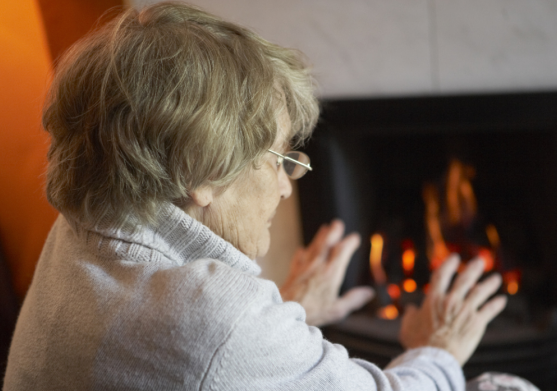 The Churchill Quarter - yet another sky-high development in Bromley

Lib Dems call for the council to limit the height of new buildings before high-rises become the norm.

Developers have released revised plans for the high-rise development next to the Churchill Theatre in the centre of Bromley.   If the council approves the plan, two rows of giant tower blocks, including 413 flats, will go up casting a permanent shadow over both Church House Gardens and Library Gardens. No commensurate increase in funding is planned for essential local services.

Amazingly, this development is actually owned by Bromley’s Conservative-run Council - they plan to use compulsory purchase orders to get hold of the land. This means they could, if they wanted to, stop the project in its tracks. They could pause it to consider alternatives that are more in keeping with our town, protect our green spaces, and provide more affordable homes. They could also choose to fund stronger local services to cater for new residents. But they refuse to do that. 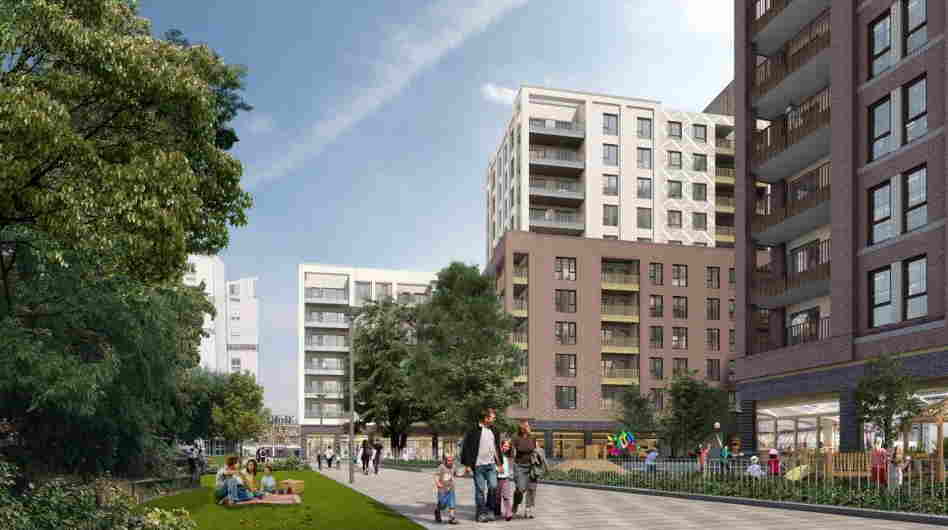 The council are pushing ahead and, cynically, the planning application will not be heard until just after the local council elections in May 2022. With a long track record of supporting these sky high developments, we suspect that the Conservative council will push this proposal through irrespective of any promises of opposition by local candidates.

Please give you feedback opposing the development here.

You may well have your own reservations about this development. Bromley Lib Dems oppose the development because:

Bromley Lib Dems want to see a limit on the height of new developments in Bromley council's 'Local Plan'. We want a focus on affordable homes for local families and a reinvigorated High Street with improved services for new and existing residents. Sadly, the Conservatives have failed to even release their much delayed 'Local Plan' for Bromley and instead are driving forward with developments that don't deliver what local people need or want. Don't let them get away with it.

The Bromley Town Lib Dem team have a produced a video about the development which you can see here. 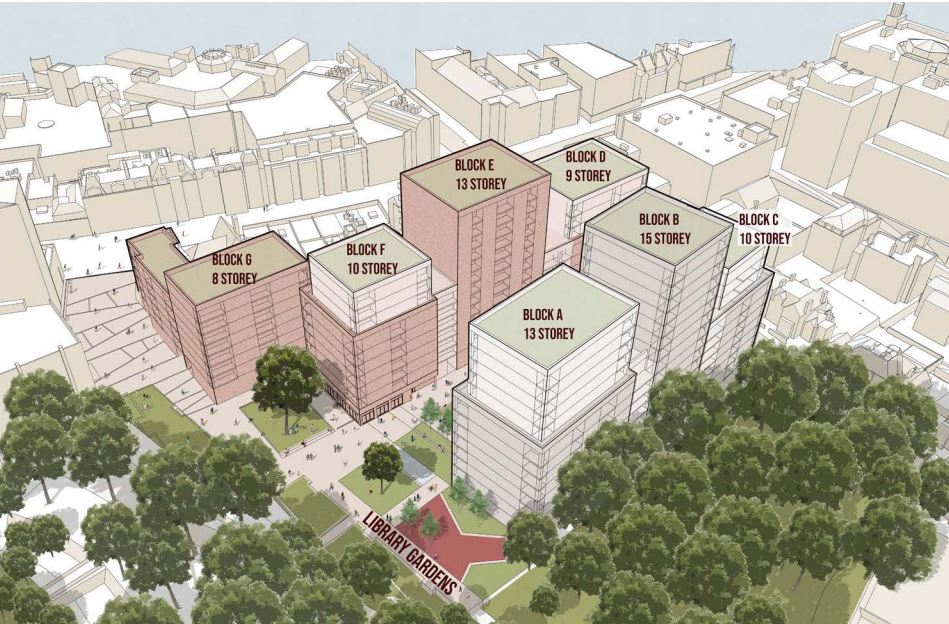 Bromley Liberal Democrats have called on Bromley Council to ensure its considerable investment portfolio - both pension fund and council investment funds - do not support fossil fuels.

Burning fossil fuels poses a serious risk to the stability of the climate upon which our well-being and economy depend, and research demonstrates that up to 80% world’s proven fossil fuel reserves will have to remain unburnt if we are to have a reasonable chance of keeping global warming to less than 2 degrees Celsius. 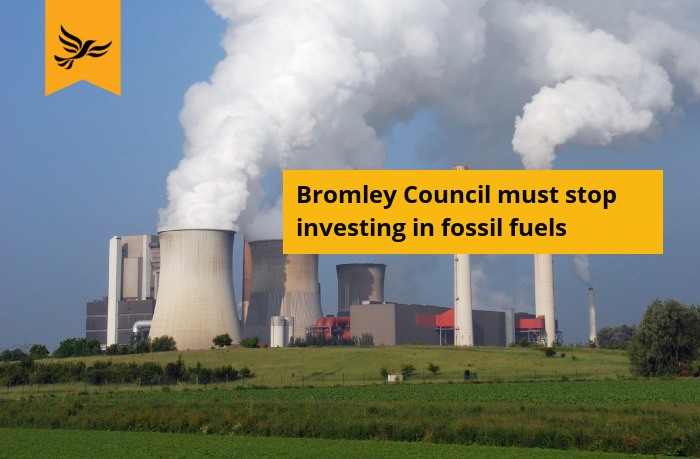 Bromley Liberal Democrats believe that Bromley Council should invest its investment funds in ways that support the Climate Emergency and - since 80% of fossil fuels must remain in the ground, the reserves of the fossil fuel industry risk becoming ‘stranded assets’ with little or no value – representing a substantial financial risk for those that invest in them.

Bromley Liberal Democrats have also called for an urgent review of Bromley Council's investment policies to ensure that any new investments in fossil fuel companies are ruled out and that future investments do not support direct ownership or co-mingled funds that include fossil fuel public equities and corporate bonds.