On Saturday 23rd March Bromley Liberal Democrats will join Lib Dems from across the UK and thousands of supporters of a People's Vote to march through central London to demand a People's Vote on Brexit. Last time over 700,000 joined the march - this time we hope to make it more than 1 million.

Brexit is a national embarrassment.  It will be a disaster for Britain, whether it is delivered by Theresa May’s Tories or Jeremy Corbyn’s Labour. Bad for jobs, the environment, the economy and the NHS. Make your voice heard - join the march and demand a People's Vote.

Will you come with us?

We're meeting at 11 a.m. on Park Lane London W1 (just outside the Dorchester Hotel).  You can meet us there or join us on the train to London Victoria.   Those coming from Bromley South should meet at 9:40 outside Bromley South station, travelling on the 09:49 from Bromley South.   Those travelling from Orpington should get on the 09:24 and change at Bromley South (arrives Bromley South at 09:33), and link up with the Bromley team.   Other Lib Dems from Beckenham and Penge can join the train as it travels to Victoria.  It calls at Beckenham Junction at 09:55 (suggest you meet at 9:45), Penge East at 09:59, arriving at Victoria at 10:18.   From there we'll get a bus to the meeting point.   The march will set off at 11:00. 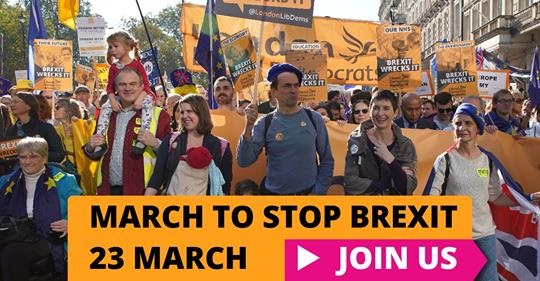