The government has today released figures which reveal that the number of hate crimes that took place last year was a ten per cent increase on the previous year.

"While increases in hate crime over the last five years have been mainly driven by improvements in crime recording by the police, there has been spikes in hate crime following certain events such as the EU Referendum and the terrorist attacks in 2017.

You can view the report here.

“There can be no doubt that divisive, inflammatory rhetoric from right-wing, pro-Brexit politicians – including Boris Johnson and Nigel Farage – has contributed to this shocking rise in hate crime.

“All of us with a public platform must stand up to those whose language spreads hate – whether on the basis of race, religion, sexual orientation, gender identity, disability or anything else.

“Liberal Democrats will tackle the appalling rise in hate crimes by making them all ‘aggravated offences’, so that hate crimes against women, LGBT+ people or people with disabilities are treated as severely as those motivated by racial or religious hatred.

“We will give the police the resources and training they need to identify and prevent hate crimes, and condemn politicians who use inflammatory language.” 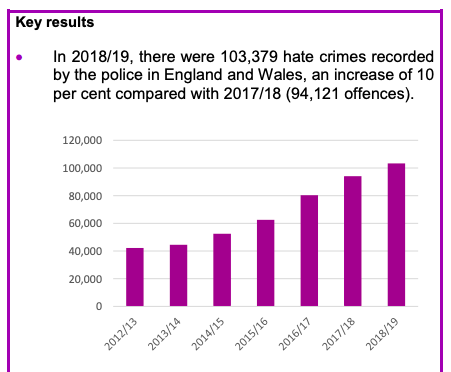