Air pollution is to blame for nearly 40,000 deaths each year in the UK. And independent research has shown Bromley has the highest number of air quality related deaths in all of London despite being one of the greenest and least urban boroughs.

Everyone has the right to clean air, but it’s a right many people in the UK are unable to realise. The Conservatives have repeatedly failed to take meaningful action to address this killer, nationally and locally.

Our national limits for nitrogen dioxide and particulate matter are set at four times the level of the World Health Organisation guidelines. 1 in 4 pupils attend schools in areas over air pollution limits. And the UK has broken air pollution limits for a decade, costing the NHS billions to treat people affected.

We need to ensure that the right to clean air is one which people can realise.

At the Lib Dem Spring Conference on 11 March 2022 members called on local authorities to:

In Bromley we have been asking the Council to install live air quality monitors across the Borough, instead there is just one located off Widmore Road in central Bromley. We have built our own network of monitors - we currently have 19 monitors providing live data showing here . One air monitor is simply not sufficient to provide good coverage of the whole of Bromley borough - the largest borough in London. 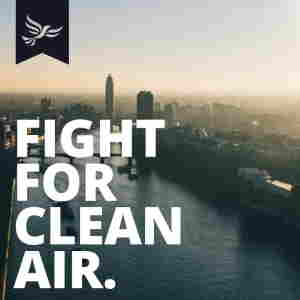 The Conference called on the Government to: