Figures secured by the Bromley Lib Dems shows that over the past 3 months, there was a 40% rise in fly-tipping, with almost 1000 fly-tips removed across the borough whilst access to recycling centres remain very limited.  Despite an increase in the number of slots being made available residents and businesses currently have to wait over a month to secure a slot to recycle their waste.

During the lockdown, various recycling facilities across the borough were heavily restricted or stopped altogether. Indeed for around a month, household recycling was entirely suspended, although other neighbouring boroughs were able to at least keep a minimum service running. Residents were instructed to keep their household reycling in a "safe, dry place" although many found this difficult, especially in flats and areas of communal living. At the same time however, access to waste disposal sides at Churchfields Road and Waldo Road was restricted, and the council offered no options to help manage the situation. 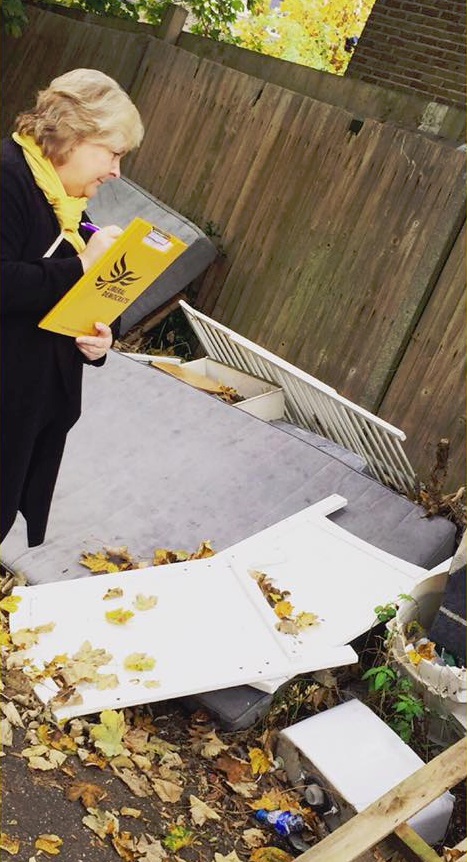 Throughout the lockdown period from April - June 2020, there was a significant increase in the number of fly-tips removed. Figures from the recent meeting of Bromley Council show that 996 fly-tips were removed, compared to 721 in the previous year, an comparative rise of 40%. So far despite many investigations having been started, no enforcement action has been taken. During the same period last year there were 62 investigations, yet only 6% resulted in any enforcement action being taken.

As we move out of the lockdown, Churchfields Road and Waldo Road remain open by appointment only. The earliest slots to book an appointment are - at the time of writing - over ONE MONTH away. This disincentives those trying to responsibly dispose of their waste and while the majority of residents do their bet to cope with the delay it does inevitably lead to an increased in fly-tipping.

Fly-tipping is a nuisance for everyone, ruining the landscape of our communities, causing stress for nearby residents and releasing potentially harmful chemicals and items into the wider environment. Whilst Bromley Council claim to be tough on enforcement, the lack of investigations and successful enforcement actions over sevearl years suggest this is not the case. By failing to work with communities and understand their needs during this difficult time, Bromley Council has allowed fly-tipping to increase and have so far failed to follow this up with enforcement action to discourage offenders and keep our borough clean.