Lib Dems to win in Bromley after by-election bounce?

The 3 Tory held constituencies in the Bromley borough all feature on the list of the 154 constituencies that would turn Liberal Democrat at an election.  These are Bromley & Chislehurst (19%), Beckenham (19%) and Orpington (24%). The 25% from Chesham and Amersham has put these blue wall seats “on notice”.

The Liberal Democrats are winning against the Conservatives. At the May 2021 local elections the party gained a host of seats and Councils from them at the local elections last month - from gaining control of Cambridgeshire and Oxfordshire Council for the first time ever, to gaining seats in Wiltshire, Woking, Surrey, Tunbridge Wells at many more.

“Our huge triumph in Chesham and Amersham has shown that the Liberal Democrats are a serious and credible opposition to this Convervative party.

“Their blue wall isn't just on notice; it has been shaken at its foundations by the Liberal Democrats in both the Chesham and Amersham by-election and the last set of local elections.

“Residents do not like being taken for granted and that’s exactly what this Conservative party is doing time and time again.”

"This is a huge victory for the Liberal Democrats. The people of Chesham and Amersham have sent a shockwave through British politics.

"We were told it was impossible for any party to beat the Tories here in Buckinghamshire. We were told this seat was too safe and the Tories too strong. This Liberal Democrat win has proved them utterly wrong.

"Across the south, the Tory Blue Wall is beginning to crumble. Here and in great swathes of the country, only the Liberal Democrats can beat the Conservatives and breach their Blue Wall.

"This amazing win will strengthen our fight to safeguard our precious natural environment and build a fairer, greener, more caring country." 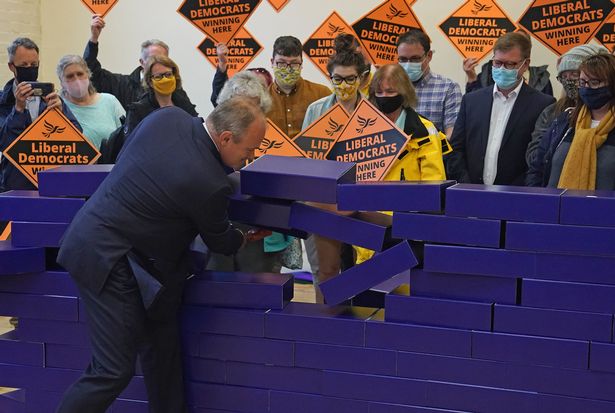