Bromley Council voted to increase next year’s council tax by 3.9%, voted to increase staff wages by 2.5% and voted to give the leader of the council, Colin Smith, a 25% pay rise. This is a slap in the face for council staff whose pay, in real terms, has declined over the past 10 years and which for many is below the London Living Wage.

Lib Dems attended the bi-monthly meeting on 24 February 2020, and as the last meeting before the end of the financial year it is traditionally the meeting where the council meet to agree their budget for the following year and the rate of council tax to be paid by residents.

Sadly this particular meeting has become a bit of a farce, and this year was no exception. The Conservative block congratulated themselves on what a wonderful job they think they’ve done, citing a report pack of many hundreds of pages.   The Labour Group presented a hastily produced 3 page alternative that argued the opposite and, as they hadn't bothered to circulate it in advance, there was no chance of any cross-party agreement on any of the issues they highlighted.  Leader of the Council Colin Smith applauded himself for the excellent job he’d done all year and Cllr. Michael Tickner offered his usual solutions: the housing crisis will be cured by stopping immigration, traffic needs to be sped up not slowed down in order to reduce pollution, particularly outside schools! Happily there was no support in the room for Cllr. Tickner's views - this time at least.

So more of the same for 2020.  More promises of new social housing with not a single brick laid.  Promises of being carbon neutral by 2029 were restated, but only if you count 5% of the borough’s output. A lack of vision or planning for this meagre goal was clear, though the Tory council did pat itself on the back for serving water from jugs rather than plastic bottles in this meeting. It is clear that lip service is the order of the day when it comes to this unbalanced council.

We only have to look across to Sutton Council, demographically not dissimilar from Bromley, to see how things could be different.   The Leader of Sutton Council sent out this letter to their residents explaining their budget decisions: 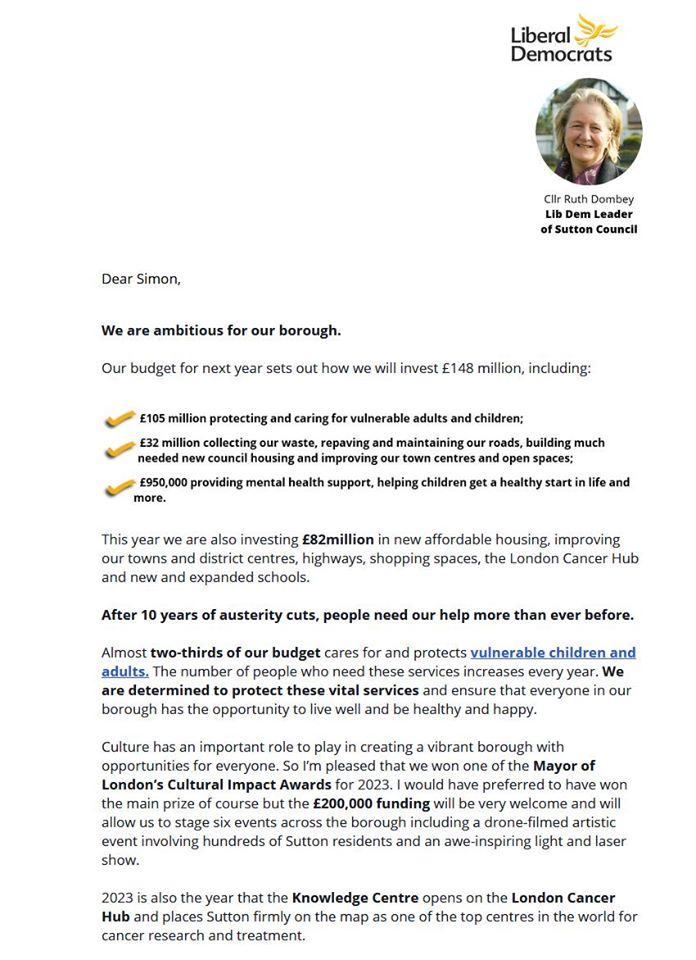