What Goes on Inside Bob's Brain?

Beckenham Conservative MP Bob Stewart has published another rather bizarre blog post, which raises more questions than it answers. Mainly, what is going on in Bob's brain?

Accompanied with a picture of himself apparently wearing an upside-down surgical mask, the MP claims masks are "hardly airtight" yet laments that he has to "rebreathe the same stale stuff" by wearing one.

He states a mask won't stop a floating virus entering the lungs- a true but fortunately imaginary scenario. He does concede that "if we want to stop spittle hitting other people when we talk, cough or sneeze...then [masks] might suffice to do that". Fortunately, the World Health Organisation (WHO) has a Q&A page to explain that is exactly how COVID-19 spreads.

Bob Stewart says he is awaiting the evidence. The WHO has a helpful document for those who wish to know the guidance, and the 80+ pieces of evidence considered- published 6 weeks before his post.

This wilfully ignorant talk is to be expected from the man who echoes Donald Trump, calling COVID-19 a "foul Chinese illness". Further echoes along this line:

One final point: Bob Stewart said he has to "re-fix the damned thing" when he has to go on the bus or the Tube. It would be prudent he reads his own government's guidance not to re-use disposable masks, and perhaps consider wearing them the right way round. 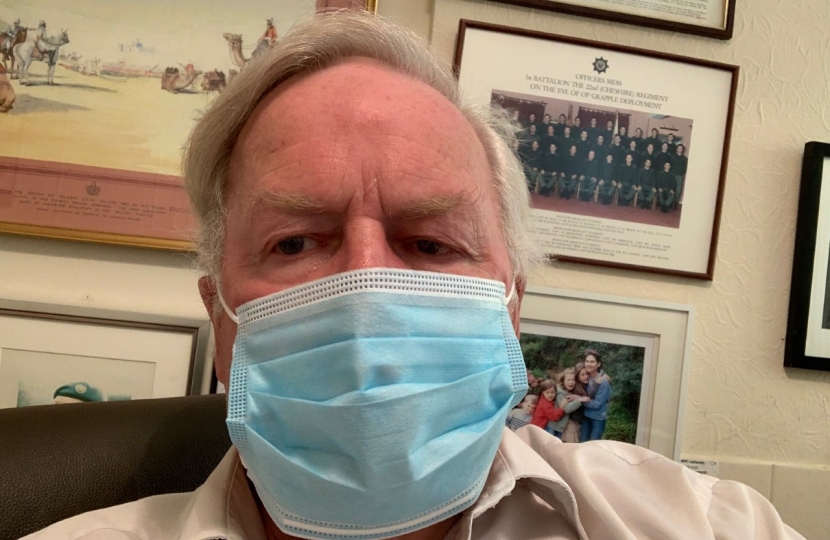