Tory MP for Beckenham, Bob Stewart, has been named as one of 5 MPs who wrote positive character references for the jailed former MP Charlie Elphicke to persuade the Judge to give him a reduced sentence.  As a result he has been referred to the Parliamentary Standards Committee.

Elphicke was sentenced in September to two years in prison after being found guilty of three counts of sexual assault against two women.  Stewart wrote on House of Commons notepaper asking that Elphicke's sentence should be reduced because of his hard work as an MP - with Stewart dismissing the crime as "folly".

Beckenham Lib Dem Campaigner Chloe-Jane Ross has criticised Stewart's intervention.   "I am disgusted that Beckenham MP Bob Stewart has written to encourage a lighter sentence for sexual offender Elphicke, who was described by the judge as a ‘sexual predator’. And to use the word “folly” to describe Elphike’s actions which saw him convicted, is a disgrace. This is not the certainly not conduct I expect or want from my Member of Parliament and I am sure many people across the Beckenham constituency agree."

Bob Stewart was one of 5 MPs rebuked by senior judges for seeking to exert “improper” influence before Elphicke was sentenced.  The MPs have been referred to the parliamentary commissioner for standards by the Labour MP Helen Hayes after they wrote to senior judges before the hearing and expressed concern that “matters of principle” should first be considered by senior figures of the judiciary and parliament.

“In doing so, they sought improperly to influence the decision of a judge in the Elphicke case itself,” wrote Hayes. “Of particular concern is the use of House of Commons notepaper for this letter, showing disregard for the important separation of constitutional powers and the independence of our judicial system." 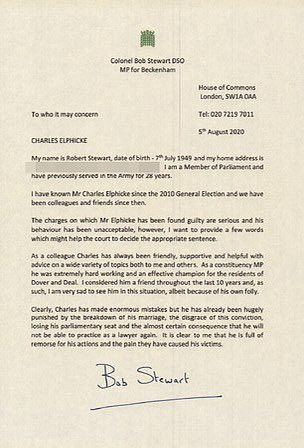